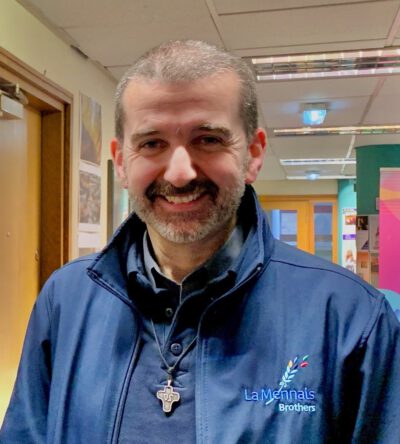 Bro. Jim Hayes is a De La Mennais teaching Brother based in Liverpool. Having studied Music (B.A.) at Liverpool University, Bro. Jim went on to teach Music, Film Studies, R.E. and French in schools in Liverpool and Southampton since 1992, in more recent years combining teaching with work as a school Chaplain.

He is a multi-instrumentalist though clarinet and bass clarinet are his main instruments. He has worked extensively in music liturgy, leading modern-style worship bands as a vocalist/guitarist in schools, parishes and youth events, arranging worship songs for use in these settings and composing his own mass settings, worship songs and responsorial psalms. Bro. Jim used the extra time during this past year’s lockdowns to record a number of worship song covers and original songs (“Covideo Sessions”) which he uploaded to YouTube.

In 2019 he was appointed an Assistant Provincial for his order’s Province of France and England. His work in this role has led to a move this coming summer to one of the order’s communities in Brittany, France.

Back
Go to Top